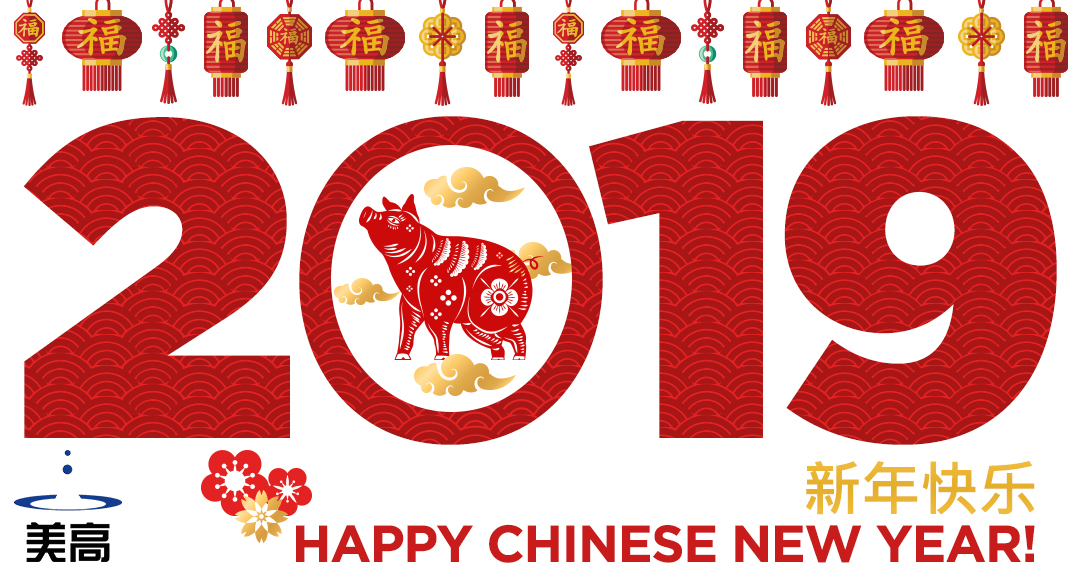 The Year of the Pig

The zodiac signs have existed in Chinese culture for over 2,000 years, and it is believed to have begun from a worshiping of animals. According to legend, the zodiac animals originated from the Jade Emperor (玉皇大帝—yù huáng dà dì) who needed to pick 12 animals as palace guards. The order of the animals adheres to the order at which the animals arrived at the Emperor’s palace. The 12 zodiac animals, in order, are the rat, ox, tiger, rabbit, dragon, snake, horse, sheep, monkey, rooster, dog, and pig. 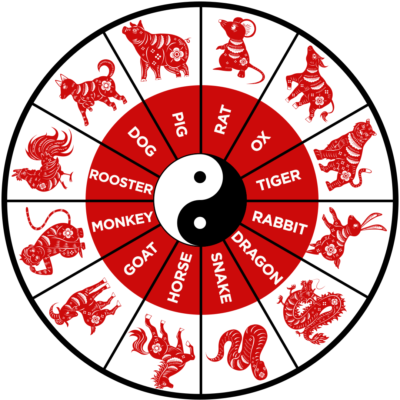 Since MECO was founded in 1928, our zodiac animal is the dragon. The dragon was the fifth animal to arrive to the emperor, but 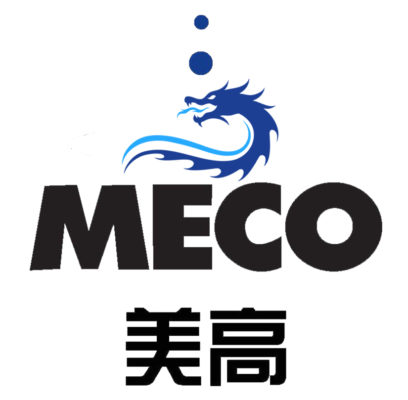 everyone thought the mighty animal would be the first to arrive. According to legend, the dragon saw someone suffering from drought on his way to the palace, so he created rain for the person. This made him late for reporting to the Jade Emperor, thus making the dragon the fifth animal to arrive. No other animal could be better suited for a water purification company like MECO! Want to know your zodiac animal? Here is a list of all 12 animals and the years they correspond to: 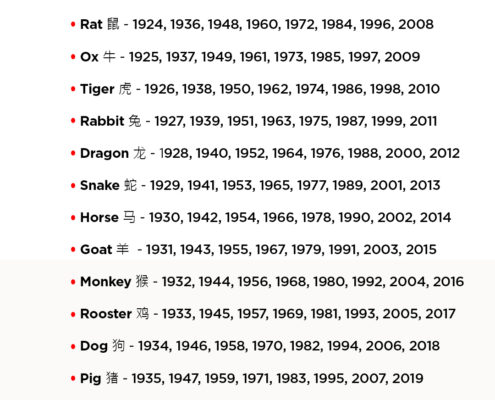 The zodiac was created as a system for keeping track of years, so it is based on a 12 year cycle, with each animal representing one year in the cycle. The animal year when a person is born is very important, and it is referred to as your Ben Ming Nian. It is easy to calculate if it is your zodiac year of birth – just figure out if your age is a multiple of 12! Although your Ben Ming Nian is your year, the superstition is that your zodiac year will bring you bad luck. If your age is a multiple of 12, you might consider wearing red this year as a way of protecting yourself from evil spirits.

Many know that Chinese New Year is celebrated with red decorations and fireworks, but few are aware of the reason behind the festivities. 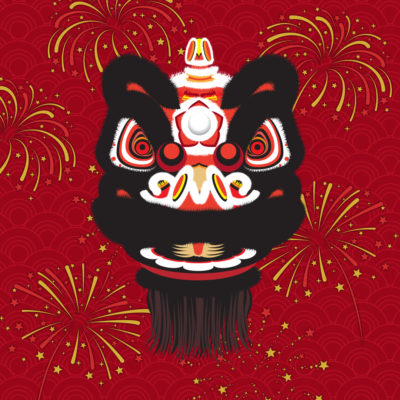 According to legend, there was a monster called Nián (年) that wreaked havoc on villagers during ancient times. The monster typically lived at the bottom of the sea, but he would emerge once a year to feast on animals and humans, destroying the villagers’ towns and harvest. The villagers would escape to the mountains each year to escape the wrath of Nián. One year, when everyone was fleeing to the mountains, a poor beggar came to seek refuge in the village. One villager, an old woman, took pity on the beggar and decided to house him rather than escape to the mountains. To repay the old woman for her kindness, the beggar promised to rid the town of the evil monster. At midnight, the beggar was able to scare Nián away with red decorations, his red clothing and loud firecrackers. The villagers were ecstatic to return to their village intact, and they realized the color red and loud noises were the monster’s weakness. This is why Chinese New Year is celebrated by families eating dinner together in homes protected by red decorations, everyone wearing red clothing, and fireworks set off at midnight.

The Little Year kicks off the beginning of the New Year celebrations and lasts for 8 days. This year it starts on January 28th and lasts until New Year’s Eve on February 4th. Little year is a time of memorial and prayer ceremonies, but it also a time to prepare for the New Year. Since sweeping and throwing out garbage is not allowed until the 5th day of the spring festival (so that you don’t throw away any of your New Year luck), the Little year is a time dedicated to cleaning, so that all of the bad luck is swept and thrown away before the New Year. Little year is also a time to pray to the Stove God (灶神), who is in charge of people’s meals and livelihoods. On the Little New Year, he returns to heaven to report to the Jade Emperor about how each family behaved during the year. When he returns back to Earth, each family is either blessed or punished by order of the Jade Emperor. This legend has made malt candy gourds a staple of Little New Year, as families will leave the candies out for the Stove God, much like Santa is left cookies, so that he will report good things about them or the candy will stick his teeth together, making him unable to report on the family.

New Year’s Eve then starts off the Spring Festival. The most important meal of the year occurs on this day, as well as the big family reunion. Almost everyone returns home for the New Year’s Eve dinner, causing the largest annual human migration in the world. Even if a family member is unable to return for the New Year’s Eve dinner, the family will leave a spot empty for the missing family member. The food severed at the dinner is a feast of everyone’s favorite dishes, and each dish is meant to symbolize wishes of prosperity and blessings for the New Year. Common dishes found at the grand dinner include: spring rolls, dumplings, noodles, steamed fish and chicken, Nian gao, hot pots, and many other delicious treats. After the dinner, the children receive gifts of red envelopes 红包, which contain money, and they are meant to help transfer fortune from the elders to the children. The money is also

supposed to pass on more than riches, as the money symbolizes good fortune and blessings for the upcoming year. In the new age of technology, it is a common practice to send virtual red envelope gifts.

The Spring Festival then begins at midnight with firework celebrations to bring in the New Year. The Spring Festival will then last for the next 11 days. As married couples return to the homes of the husband’s family for the New Year’s Eve dinner, the second day of the Spring Festival is saved for visiting the wife’s family. The next 10 days are dedicated to different animals, gods, etc., with each day having its own practices and traditions.

The New Year celebration then concludes with the Lantern Festival, or Yuan Xiao (元宵节). The Lantern festival symbolizes reunions, just like the rest of the holiday, however the festival is unique in that it also celebrates socializing and freedom. The Spring Festival is a period to spend time with family at home, but the Lantern festival is a time for everyone to celebrate in the streets together. Lighting of the lanterns is of course the most notable aspect of the festival, which is meant to represent hope, success, happiness, and wishes. The lanterns are intricately designed, and they can be as small as a tennis ball to as big as a parade float!  Other aspects of the Lantern festival include dragon dances, lion dances, and, of course, delicious trademarked dishes specific to the festival. 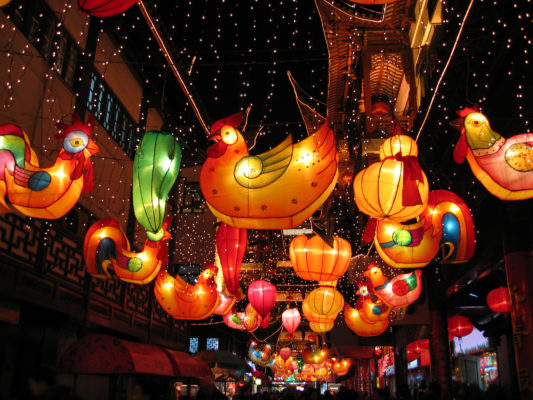 With over 20% of the world celebrating Chinese New Year, you can find the holiday being celebrated in countries all over the world. A large 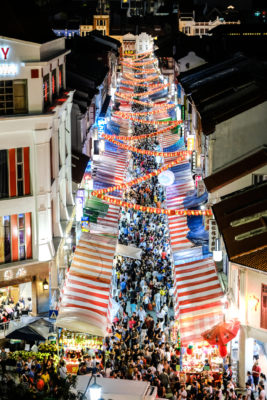 portion of Singapore’s population is Chinese, so it is no surprise you will find the streets of Singapore decked in red decorations on the days leading up to February 6th. New Year celebrations in Singapore include traditional Chinese practices and festivities, but there are many exciting event in Singapore that are purely distinct to their unique culture.

New Year celebrations can be found all over the Island, but the majority of festivities occur in Singapore’s Chinatown. The Chinatown Festivals last for seven weeks, starting on January 20 th and ending March 6th, and they “aim to enliven the Chinatown precinct while creating an inclusive community by fostering a strong bond of togetherness among the community, new citizens, other ethnic groups and tourists.” The celebrations kick off with the Official Light-Up and Opening Ceremony, where the streets of Chinatown come to life with beautifully designed lanterns, entertainment by local and international performance troupes, and a brilliant firework display. Other exciting events include Chinatown walking trails, a New Year countdown party, a festive street bazaar, nightly stage shows, and the 12th International Lion Dance Competition.

Chinatown is not the only place you can celebrate the Lunar New Year, as you can soak in the festive spirit throughout the island. On February 15th and 16th, you can catch the Chingay Parade, Asia’s largest street performance and float parade, which makes its way across the heartland of Singapore. Through dazzling floats, dancing dragons, and stilt walkers, the parade captures the essence of Singapore’s unique multicultural personality. The parade may occur during the Chinese New Year, but this spectacular event brings together all of Singapore’s incredibly diverse population. February 3rd through the 10th also offers the River Hongbao extravaganza on the Marina Bay floating platform. This sensational event includes nightly fireworks, larger-than-life lanterns, amusement rides, delicious food, and many other entertaining activities.

There is never a dull moment in Singapore during the Lunar New Year Celebrations!

In 2009, MECO opened an office in Singapore, expanding to the Asia-Pacific region for the first time. MECO employees in Singapore eagerly 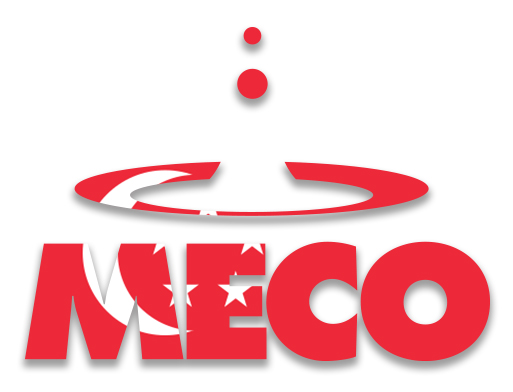 await the exciting holiday, so they can celebrate the New Year with family and friends. The General Manager of MECO Asia-Pacific, Jason Koh, says the highlight for all children, including adults who are not yet married, will be receiving the red packets filled with money. The employees of MECO Singapore are excited to choose the delicious dishes that will be served at their family reunion dinner, since each family has a unique dinner menu of family favorites. Although, according to Jason Koh, “most families tend to dine out now, where you will need to make a restaurant reservation months or even 1 year ahead for popular places!” Singapore’s Lunar New Year is more than just parades, fireworks, and delicious food here at MECO. This holiday is very important to the people of Singapore, so it is important to MECO.

Discover more about how our Singapore roots started and continue to grow through our company.