Back to blog home July 20, 2021
Water for Injection
Posted by: Natolie Herold

Water for Injection – A Critical Utility 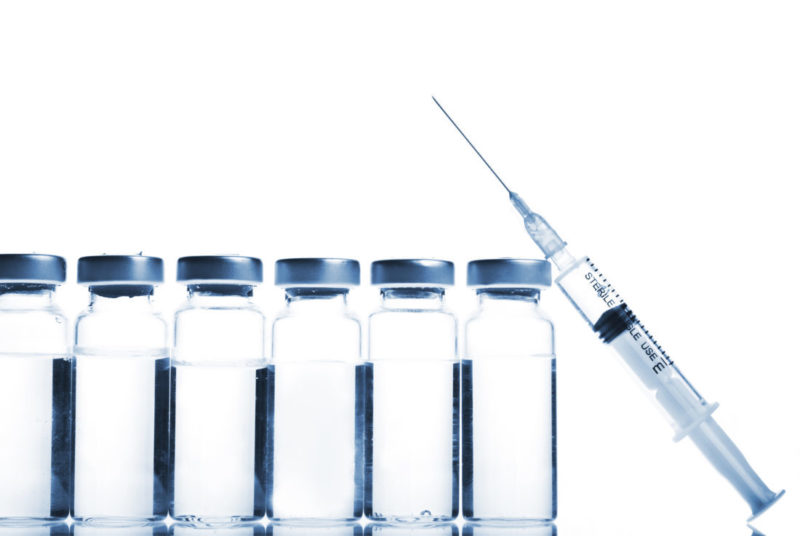 Pharmaceutical-grade water production is a key area of specialty for MECO and our water purification systems. Meeting the requirements of various major Pharmacopeia regulations, MECO delivers water production through highly engineered processes, with the guidance and leadership of expert-level water purification specialists, averaging over 25 million gallons of pharmaceutical grade water daily. This level of Purified Water (PW) and Water for Injection (WFI) production serves the continual demand for use in the biotechnology and pharmaceutical industry.

What is Water for Injection?

Water for Injection, commonly referred to as WFI, is a solvent that is used to dilute other medications or solutions that will be injected into the body. By regulation, it can contain very little biological or chemical agents that inhibit bacteria or microorganism growth. Water for Injection (WFI) is utilized as a pharmaceutical vehicle to deliver drugs intravenously (parenteral preparations), but also as a fluid replenisher after an appropriate solute.  Additionally, WFI water can be used for inhalation medications (breathed directly into the lungs) and some ophthalmic (eye health) products.

Comparison of Water for Injection and Purified Water

WFI and Purified Water are categorized based on their physical, chemical and microbiological properties. These categories/requirements are determined by Pharmacopeias and a comparison of these requirements for the US Pharmacopeia and European Pharmacopeia are represented in the tables below. 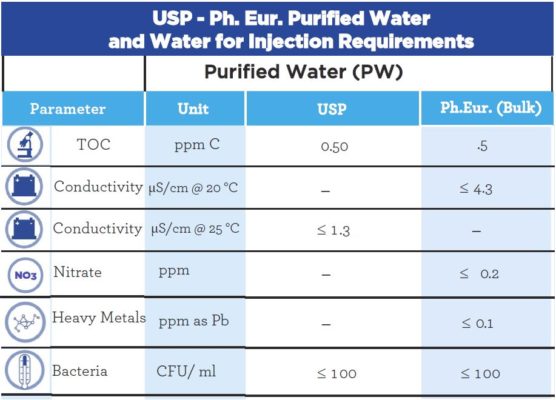 Purified Water systems typically include two stages that treat the feed water. Pretreatment is the initial stage, which modifies the water quality to reduce or eliminate: suspended solids, hardness, metals, organics/TOC, fouling/scaling of downstream components, and disinfectants (chlorine/chloramines) that can be harmful to downstream unit operations. The second stage is the final treatment, where most modern systems include pretreated water entering reverse osmosis membranes before passing through an Electrodeionization (EDI) module or other deionization process, which further polishes the water to lower the conductivity.

However, some Purified Water systems include distillation, with Vapor Compression being the most common as it can generate ambient water without the need for an external cooling medium. Purified Water can be used in non-parenteral preparation for pharmacology including tests and analyses.

As far as WFI goes, there are only three acceptable methods for the production of Water for Injection. Approved methods include: multiple effect distillation, vapor compression distillation or a membrane-based approach.  In this industry, WFI is the absolute, most pure water product regulated.

There are three most common systems used in the production of WFI water. All of these include water softening and carbon filtration as a means of scale control and dechlorination of the feed water source. 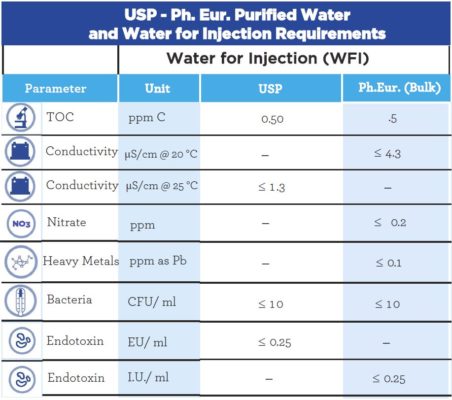 Reverse Osmosis with or without EDI and Multiple Effect (ME) Distillation: Multiple effect distillation has been the most commonly used method globally. Since energy costs in a multiple

effect system can be high, larger-capacity systems will typically have a greater number of effects to reduce the energy input to the system. Smaller capacity systems may only have three to five effects, which results in lower capital cost for the end user. Multiple effect distillation (utilizing higher temperatures) normally pretreats feed water at a minimum with reverse osmosis (RO) to remove dissolved ions that would otherwise promote scale or distiller corrosion. The RO unit effectively removes dissolved ions, bacteria, viruses and suspended solids. The RO unit will normally have a minimum pretreatment system consisting of water softening, carbon filtration and cartridge filtration. This aids in the removal of hardness, chlorine and particulate matter, respectively. Given the operating pressures of both RO and ME, it is common to store water in an intermediate storage tank with a feed water pump. Some pretreatment systems are subject to periodic chemical cleaning. Hot water sanitation systems can also be used, but they increase capital and operating costs. The majority of ME Still generated WFI systems store the water in a hot tank and are distributed hot to all Points of Use. 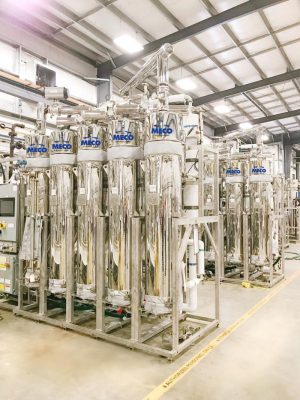 Reverse Osmosis / Electrodeionization (EDI)/ Ultrafiltration: Other system designs have been used with reverse osmosis coupled with the appropriate pretreatment, deionization and ultrafiltration. Variants to the core of the RO/EDI/UF design may include the use of ultraviolet light, double pass RO, membrane degasification, and hot water sanitization of all components downstream of the disinfectant removal step. Similar to multiple effect distillation, the softener serves to remove hardness and the carbon filter is for chlorine removal. The reverse osmosis removes most of the dissolved ions, organics and particulate matter. Most of the remaining dissolved ions are removed through electrodeionization. Ultrafiltration is used as a final step to remove any bioburden and endotoxin that may still be in the water. Typically, the system is hot water sanitizable for biogrowth control and equipped for chemical cleaning/sanitization. The product water recovery rate is ~70%, considering backwashing and rinsing of the softeners and carbon vessel as well as reject from the RO and EDI. Storage of the water is typically at ambient temperatures as the WFI is generated at ambient temperatures. Some systems are periodically chemically cleaned/sanitized while others are periodically hot water sanitized. Some generation systems are heated up to self-sanitizing temperatures before feeding the storage tank and maintained at said temperatures. Ozone can also be used to continuously disinfect the WFI in the storage tank but ozonated WFI is not sent to the Points of Use. An ultraviolet light is used to destroy it before it is distributed. 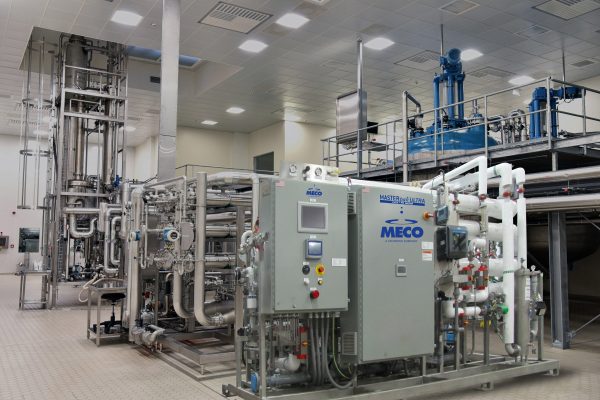 Vapor Compression (VC) Distillation: Vapor Compression Stills operate at lower temperatures than Multiple Effect Stills, making them less susceptible to scaling and corrosion. Therefore, they have the ability to operate on a simplified pretreatment system (typically softened, dechlorinated feedwater) without the need for reverse osmosis. Vapor Compression stills can produce water at both hot (80°C) and ambient temperatures (~10-12°C above feed water temperature). The distiller can be switched between the ambient mode and hot production through opening and closing the valve around the distillate heat exchanger(s). An ambient (cold) VC Still can periodically sanitize the storage and distribution system with hot water from the distiller and is a major advantage of this system. An ambient VC Still is advantageous because it recovers more heat and therefore requires less plant steam to operate than one that produces WFI hot.

Another benefit of VC distillation is that any leak within the evaporator will present itself as high conductivity on startup. This is because the distilled water is processed at a higher pressure than the feed water, so any leakage progresses from the distilled water side of the heat transfer surface to the feed water side (as opposed to the other way around). In a membrane-based system, the feed water is always at a higher pressure than the product water, and a loss of integrity in any one of the membrane systems or the EDI will negatively affect the water quality. Historically, vapor compression systems have been criticized over the compressor, a mechanical component necessary for the proper operation. However, modern advancements and diagnostics have made these compressors highly reliable and maintenance is often accomplished in a matter of a couple hours, if required.

Water for Injection is an essential element in the biopharmaceutical manufacturing process. Many production methods can be implemented based on a number of factors, including capacity, existing infrastructure, risk, reliability and energy efficiency requirements for each facility. There are pros and cons to each of the various systems, and MECO can help navigate the best potential option for your WFI system. MECO’s expert water purification specialists are available to implement highly engineered processes to achieve Water for Injection production for any facility’s needs. Contact our MECO team to learn more.